Summer stews are really a big thing in Italy and around Europe. They come under many names. For example, Caponata in Sicily, Giambotta or Cianfotta in southern Italy, and of course, Ratatouille in France.

The Tuscan Stew called Gurguglione di Elba utilizes similar ingredients that take full advantage of the summer harvest; eggplants, tomatoes, green bell peppers, mint, basil, summer onions, and garlic. We can add this to our ever-growing list of yummy eggplant dishes. The chunky, hearty nature of this recipe makes it great as a side dish, on bruschetta, or even over pasta.

The islands of Italy

How many islands does Italy have? I was shocked to learn that the peninsula of Italy is home to over 400 islands, according to Wikipedia. The largest are Sicily and Sardinia with Elba coming in third.

The island of Elba, part of the Tuscan Archipelago, has a long and interesting history. If you are like me and love to learn history from historical novels, read or re-read The Count of Monte Cristo. The story begins when Napoleon left Elba, his island of exile before returning to power.

If you are a vexillologist, one who studies flags, you might find the flag of Elba interesting. The white background has a red diagonal stripe emblazoned with three golden bees, perhaps a symbolic gesture from Napoleon.

Enough with the history, let’s eat! 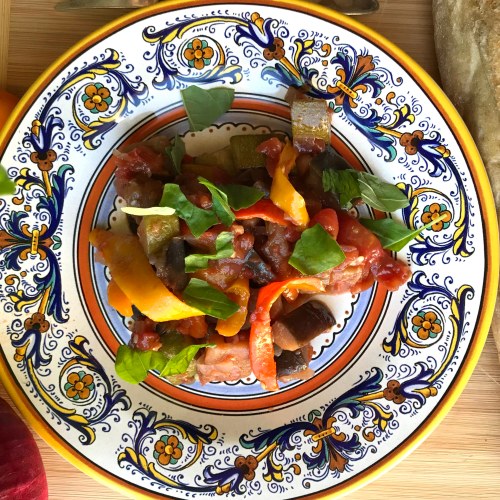