At this point, you might be saying, enough with the eggplant recipes already! I hear you, but can you stand just one more? Hey, maybe I could make it into the Guinness Book of World Records “Blogs with the most eggplant recipes” category. (not a thing, but should be!)

On a more serious note… I adapted this recipe for Baked Polenta with Eggplant and Sweet Peppers from Marcella Hazan’s “Baked Crêpé Pie with Eggplant and Peppers,” which is equally as delicious. In Bologna, the crêpé – called crespelle, made with a batter of flour, eggs, milk, and parsley can be cooked into a thin pancake and stuffed with ricotta filling or simply eaten alone or with soup. In addition, the eggplant/sweet pepper/parmigiana cheese filling can be used in myriad ways.

The substitution of polenta for crespelle seemed to make the recipe a bit less complicated and provided a wonderful excuse to make baked polenta.

Before corn came to the new world, cooks made polenta made from other grains such as buckwheat or millet. The making of polenta traditionally requires constant stirring for at least 20 minutes at the stovetop in order to reach the desired consistency and starchiness. Other less labor-intensive methods such as boiling then resting for three hours, cooking in a slow cooker, or using a microwave have been tried and discussed at length.

In my humble opinion, the stovetop method and constant stirring allows for a meditation and quieting of the mind that I often find in the kitchen. 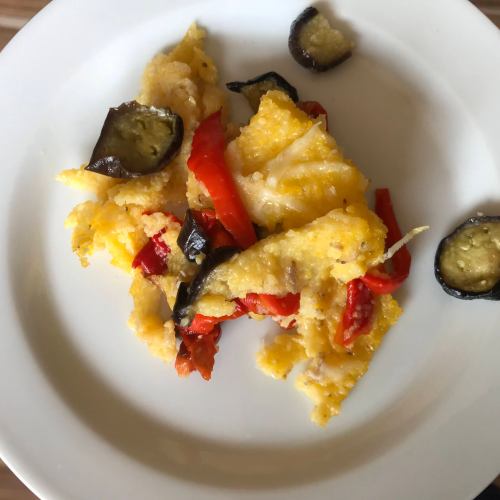 Put it all together