Before I set foot in the city of Catania, Sicily seemed to reside in another world, another time, and even an alternate universe. Part of the allure and mystery came from a strange family rumor that my maternal grandmother might have come from Sicily.

In our innocent youth, my brothers and I created a fantasy about our grandmother with a mysterious ancestry that remained a well-kept family secret. Left to our kid imaginations, my brothers and I spun fantasies about Nana’s life before she became our grandmother. Due to her diminutive build, her jet black hair and eyes, her feisty personality, we easily fit her into the stereotypical Sicilian persona. It was all guesswork however; we were forbidden from talking about Nana’s heritage. We knew our great grandparents were from Italy and that Nana and her siblings lived a hardscrabble life in the North End, Boston’s Little Italy where they became orphans when they were young. Nana’s life was so traumatic that she left her Italian side back in Boston, got married, and moved to Northern California. I discovered the truth about her (and our) heritage many years later, but that’s another story. 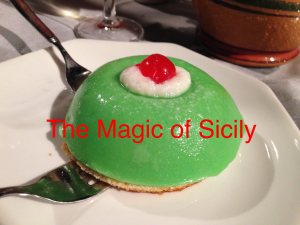 After I reached adulthood and Nana was no longer on this earth, I began my quest to find the true story of her life and my Italian ancestry. It began with a trip to Sicily in 2018. My partner and I landed in Palermo, spent three days in Catania, and then a few nights in Fondacello, near the eastern coastline under the watchful eye of the continuously tumultuous Mount Etna. She threatened to erupt at any time and seemed to hold court over all of the inhabitants, seeding the soil with verdancy, and reminding us each and every day of our human insignificance.

Catania, Sicily turned out to be a most mysterious, enigmatic city, rife with hand-filled cannoli, Arabic and African influences, Greek ruins, miles and miles of prickly pear cactus fields, blood oranges instead of tomatoes in salads, round cakes in the shape of a woman’s breast, loud and raucous fish markets, vestiges of the Teatro dei Pupi (Sicilian puppet theaters), third world-type neighborhoods with the best food in the world – everything both spellbinding and frightening at every turn.

Sicily challenged my every sensibility and, forgive the cliché, it rocked my little world.

Now that I have led you down this garden path, I am unsure how to make a proper segue into the topic of this blog post, the Sicilian recipe for Pasta alla Norma. I could delete all of the above material and simply begin with a description of the dish and its interesting history. I certainly don’t wish to leave you hanging and commit a literary blunder, so suffice to say, please stay tuned for more about Nana and my genealogy adventures for another day. For now, let’s talk Pasta alla Norma from Sicily and get to cooking this rich, naturally vegetarian treat.

According to legend, the name of this dish sprung from the lips of the famous Italian author, publisher, and journalist Nino Martiglio. When he first tasted this eggplant dish, he loved it so much that he coined the phrase, “That’s a real Norma!” likening the exquisite taste to the performances in Vincenzo Bellini’s opera of the same name. Let’s make it and judge for ourselves!