Jump to Recipe Jump to Video

My family heirlooms don’t come in piles of dollars or stacks of bitcoin. They carry a weight that cannot be measured.

When my grandparents packed their meager belongings and headed out west in the 1930s, they finally settled down in a 2-bedroom suburban home in Northern California. My grandparents, Nana and Gramp, were the epitome of country-boy-meets-city-girl. A farm boy from North Carolina Irish stock and career Navy man, Gramp found his piece of heaven in the little patch of dirt he could call his own.

Another world away from the blue ridges of the Appalachians, Nana grew up near the North End, Boston’s Little Italy. Like millions of other immigrants, Nana’s parents rode in steerage from Italy’s depopulating south hoping to find the American Dream. It didn’t quite pan out for Nana, her sister, and four brothers. They lost both parents and were left alone on the harsh immigrant streets that were filled with hate, poverty, and illness. I will never know about Nana’s home as a girl or how she learned her baking skills. To her best ability, out of survival, she left her Italianness behind and transformed herself into an American housewife.

Sure enough, Gramp took over the postage-stamp-sized backyard and planted three little delicious apple trees, one golden and two red. They grew up tall and strong. Turning the yard into his own Luther Burbank experimental farm, Gramp grafted baby branches onto his three apple trees. Soon the reds of the Romes and Jonathans shimmered smack in the middle of the golden delicious foliage. He took those three trees and exponentially made apples. Lots of apples.

In the springtime, as the new buds began to emerge in Gramp’s little orchard, he would attach an empty jar to a newly budded fruit, so that the apple grew inside the jar. Once the apple was big and plump he would cut it down, fill the jar with vinegar and seal the lid. When his friends and neighbors asked how in the world he fit that big apple through the little opening, he’d start to giggle, his eyes would scrunch up and he’d let out his special Gramp wheeze.

My grandpa, Charlie, was born in 1904 in North Carolina, on the windward side of the Appalachian mountains. Gramp grew up with no electricity and when he was just a wee lad he and his brothers rolled their own cigarettes from banana leaves. He called biscuits catheads, and I wouldn’t be surprised if he used to eat them covered in squirrel gravy. My grandparents’ eating habits must have changed once they arrived in California, but the traumas leftover from deprivation or what we now euphemize as food insecurity, must have left their scars.

So, while Gramp planted, harvested, and grew life-giving substance in his diminutive orchard, Nana occupied the kitchen. Magic happened in Nana’s kitchen. She had a little Wedgewood gas oven whose chrome stayed perpetually bright and shiny. She had the old-fashioned cooler – a tiny cupboard with a vent to the outdoors where she kept jars of jam, pickles, and other things that were best stored at cooler temperatures.

Nana measured and rolled pie crusts with the precision of a diamond cutter. Nana and I spent many hours in her green-tiled kitchen making use of Gramp’s apples. I guess you could say they were organic and pretty darn local. We made applesauce cake, apple cobbler, and countless apple pies.

I have Nana to thank for my pie crust-making skills. Yes, I admit, I make a killer pie crust. I even entered a homemade apple pie at the county fair when I was 13. Of course, in those days we used Crisco shortening in the dough. It’s a miracle that we are still alive to talk about it. Now I use butter, a healthier choice; I know Nana wouldn’t mind.

I want to thank Nana and Gramp for every second we spent together and the gift of their love. They are both gone, so all I can do is pay it forward. I guess I’ll start by sharing Nana’s recipe for homemade pie crust. 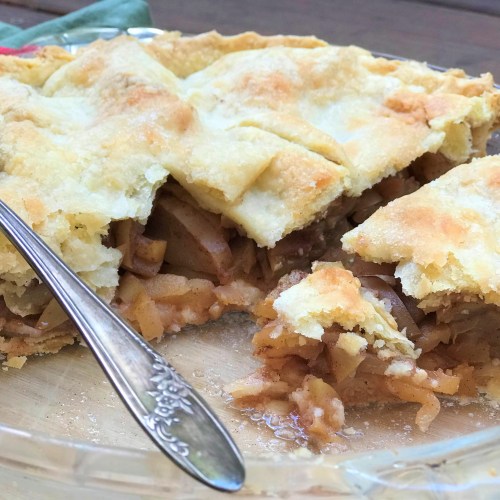 Nana’s Apple Pie (with video below!)